How to send Parol in Iceland

Making a Parol is not an easy Task. Thats why Parol Shop Online get the Parol from the local stores in Pampanga. It has double purposes, we help the local Parol Vendors get their sales going to improve their business, and for us, we can maintain the Parol Quality as authentic as possible.

We constantly receive messages from our Facebook page Online Parol Shop from people asking from all over the world if we can send the Parol. Europe, USA and Asia.

There was a time when we thought that it is impossible to send electronics to Europe until we receive one message from a nice Filipina living in ICELAND. She introduced herself as a woman who is leading a group of Filipinos living in Iceland, and that they were at that time having a small cultural presentation. There was a Parol Making in Iceland and she asked if we can send her one Parol. We said we honestly never tried, and asked if she is willing to be the first.

Packing the Parol for Sending to Iceland 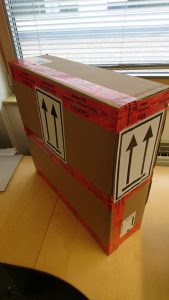 All papers filled up, the cost for sending the Parol was almost 40Euros because of the ODD size.

It took exactly 28days before they receive the Parol.

Bringing Parol from Philippines to Germany

Tags:
No response yet on How to send Parol in Iceland