Ever Wonder How Parol is Made? 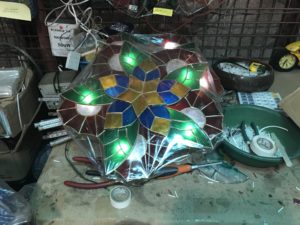 The capiz parols of Online Parol Shop came from San Fernando, Pampanga where generations of Capiz Parol makers have lived. The Filipino Capiz Parols we use are not made in factories but in people’s homes and community homes. The Capiz Parol makers are family-owned business using their neighbors throughout peak times making it a source of much-required earnings for a variety of families.

Capiz parols are popular not just in the Philippines, however, the world over as Filipinos have actually migrated practically all over!

It’s fantastic how such a stunning Capiz Parol comes from a simple shell which comes naturally in white.

Our Parols are made of capiz shell. Although these shells are an extremely thin material, they are surprisingly durable. Unless obviously, you man-handle the item then it’s bound to break! The panes are clear and permit light to pass through it making it an excellent material for a window or door as was typical in the old-world Philippines. Capiz shell was used to make a Farol or lantern to light the way to Simbang Gabi. From there, the traditional parol was born.

The best ways to make a parol

You start by cleaning the raw capiz in a tumbler. This cleaning method likewise brings a great sheen to the panes.

Capiz panes ready to be cut and made into a parol
1. Each piece is cut by hand to the size and shape that’s needed for the design.

2. Cut the capiz to make into a Parol
To hold the capiz pieces together, thin metal sheets are utilized to cut the Capiz Shells and fix it to the connecting pieces to create the style. These thin sheets are formed by hand and connected to capiz shell.

3. Decorating Capiz Parol
The cut capiz shell pieces are held together by a thin piece of brass metal (also hand cut) and fastened together to form the shape of the parol design.

When the pieces all fit together in their designated designs, the interior lights and blinkers are strategically put to take full advantage of the impact of light on the capiz shell panes.

Tags:
No response yet on How to Make Parol